“Children are the living messages we send to a time we will not see.”

Based on the quotes by John F. Kennedy, unlocking children’s potential plays a huge role on the future of our nation. Cendekia Harapan had the opportunity to share with Khalifa IMS, Sophos School and Ar Rafi’ School Bandung last Tuesday (22/12). The meeting was held via Zoom, and over 30 people attended.

Ibu Lidia Sandra, Cendekia Harapan’s headmaster talks about the importance of unlocking children’s potential from a young age, she said that every child has an instinct. They all search for comfort. And it is our job as a teacher to guide them and facilitate them so they can grow as a person with global knowledge and in hope when the time come they will help build our nation. A few of the alumni, Sheena Abigail and Timothy Dillan also tells their story to the attendant about their experience on doing research, how they divide their time between demanding school hours and the research.

“At school, they would conduct multiple tests to help me specify which subject area I am interested in, RIASEC test, Career Direct Test, and to see if it fits with my personality they did  an MBTI test. Throughout the years, there were changes in my test results but it consistently showed that I was interested in research if I’m not mistaken. Previously it was specified to be research in social studies as my RIASEC test showed so and it did reflect my interests at that time in studying social issues, but as I grew an interest in science and robotics my RIASEC test results change as well. So the tests done at school helped convince me that what I wanted to do was research and I was capable to do that. But at the same time to this day I don’t think I have a specific subject area that I am interested in, I used to say I wanted to pursue social studies but I also became interested in science and robotics, and am pursuing that now in university. So the test results were not accurate in that sense, but at least they motivated me to try and go deeper the respective fields helping me discover whether I really am interested in that field or not. And after reflecting on the many projects that I, as a student, have done, I can finally conclude that I am interested in just studying things in depth, research, that can make an impact, doesn’t matter what field or subject area it is in.” said Shane Abigail, one of the alumni of CH School.

There’s also a few of CH staff that helps explain the technical process on guiding the students on doing their research.

“What were the process of mentoring kindergarten students when doing research? Is it done at school and what if there are some parents who do not support the student’s research if it is done at home?” asked Danik Mayasari.

“The teacher’s did full mentoring at school. And the parents are educated in the parent’s crash course.” Said Pak Sabar as one of the speakers.

They also talked about the ups and downs on guiding the children’s on doing research, but as a teacher it helps tremendously on their critical thinking. The teacher can see a new perspective from their children and they both can learn from each other and grow as a person. The research process took about 3 months.

When asked about the reason behind calling this research a thesis Pak Sabar answered “Etymologically, thesis means: opinion. A thesis is a form of student work at CH, it is completely equivalent to S2. Because they are required to give an opinion. Unlike the S1 (Skripsi), which is only descriptive.”

We hope that after this session we all can learn and invent new ways to help our children unlock their potential as well as guide them towards their dream. 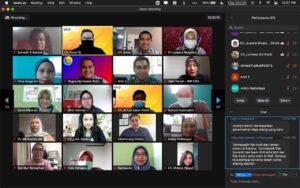 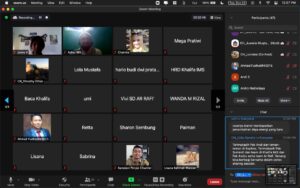